There are many factors that restrict the ability for large companies to create differentiated experiences, but it usually boils down to one thing: the larger you get, the higher the stakes.

As a company grows, appetite for risk diminishes and a rational decision making process of risk mitigation takes hold. The more you have at stake, the more you’re compelled to focus on reducing risk instead of maximizing the potential upside that differentiated experiences can enable.

The music and film industries are notorious for this sort of dynamic.

Producing and promoting an album is expensive and time consuming. Like any hit driven industry, just a handful of artists generate the majority of all earnings. But there’s a ceiling on the number of albums a single artist can produce. As such, it’s in the interest of the label to do everything they can to ensure that new albums are successful.

It only makes sense that they’d rely on safe bets: songwriters who have written hit songs, producers who have produced hit songs, backing bands who have recorded hit songs, and sounds that are currently trending in hit songs. In an effort to reduce the risk of a flop, they’re forced to play it safe and create albums optimized to sell, not break new ground.

If it’s ground breaking music you seek, look to indie artists. Unlike their publicly traded, corporate-backed counterparts with demanding shareholders, these artists have nothing to lose. Producing songs with the same formulas used by larger labels, without the marketing war chests to back them, will inevitably lead to them being lost in the shuffle. Indie artists need to cut through the clutter by producing work that is special and unique.

In the film industry, where a single release can cost upwards of $350,000,000 to produce, simply breaking even is critical. Anything less could jeopardize the health of the company, and at the very least, be career-ending for the executives involved. The stakes are astronomically high. As such, there is a strong incentive to do everything possible to ensure that every film is as broad-reaching and palatable as possible. This leaves very little room for untested, original ideas. These films lean on safe building blocks: franchises with built-in fan bases, tried-and-true stories, recognizable actors, gratuitous special effects, and battle-worn directors.

Independent film makers, by contrast, rely on raw creativity, unique storytelling, and a healthy dose of luck. The Blair Witch Project was a $250,000,000 worldwide phenomenon that had a budget of only $60,000. Having absolutely no resources for marketing or advertising, the filmmakers’ only option was to generate as much buzz as possible – and buzz comes from great experiences that people want to talk about.

When you are starting a company, you have nothing to lose – no money, no customers, no revenue, no product, no fan base. While this may feel daunting, it’s your biggest advantage. It affords you the freedom to take big swings – something for which larger incumbents won’t have the stomach.

If you want to avoid mediocrity as you grow, it’s important to focus on making something special and unique. Don’t let capital investments drive how you make decisions about the resulting experience. Sometimes this may even mean investing less. Constraints breed creativity and can help you and your team feel more comfortable with failure. And not fearing failure can often be the key to success.

About The Editorial Team
The Editorial Team consists of external and internal Delighted thought leaders from various roles and industries. These experts provide educational content for companies looking to create highly impactful user-focused experience programs through self-serve solution guides, personal narratives, and how-to strategies. More
Startups
Delighted best practices
Get more tips and tricks for crafting world-class experiences, delivered to your inbox.
Sign up now and survey customers for free. You're minutes away from getting feedback!
Get started
Free guide
Unlock the secret to collecting insightful customer feedback
Get the guide 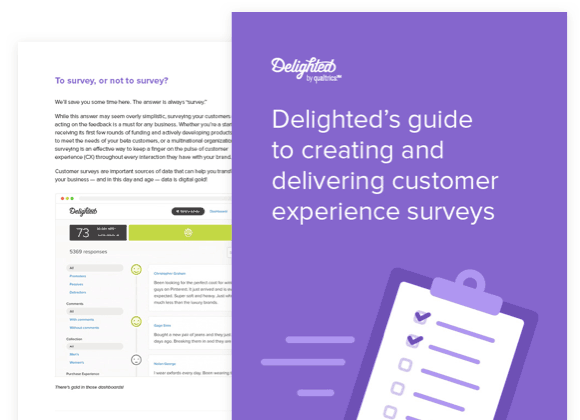 NPS is a registered trademark, and Net Promoter Score is a service mark of Bain & Company, Inc., Satmetrix Systems, Inc. and Fred Reichheld.